Indeed, it was in 1880 when the Friars of? Order of French Trappist monks in the capital began to produce a very special chocolate, still famous throughout the world. Chocolate of the Trappists for? Fact, produced with ancient recipes and strictly top secret, easily recognizable not only from the authentic flavor but also from? Unmistakable mark depicting the Colosseum and the cross. Dark, bitter seventy per cent, milk, hazelnuts or hazelnut Viterbo, ce n? Has something for everyone, even in spreads. With Christmas in the doors then? Old factory of Frattocchie that supplies the monastery of Tre Fontane on Laurentina, production is enhanced by one of the most sweet and recall for Christmas nougat. Anch? Product it “with recipes unchanged over time dating back to 1947, ‘says Joseph roars that has now taken the place of the father continuing the path laid by the monks of sweet? Order French. “Our nougat and all chocolate typically are prepared in the same way, with raw materials of high quality, the machinery of a time and unchanged tradition». But let’s take a big step back and precisely in 1880, the year in which the Trappist monks began to produce this famous chocolate. Without interruption, except during the two World Wars, the factory never stopped kneading and shaping your typical tablet and it is said that until a few years ago c? Were also those who went early in the morning at the Trappist monks to enjoy washer, bread typical of Rome, filled with a generous dose of hot chocolate.

There are no reviews yet. 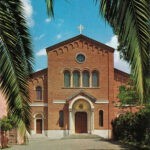